For years these aquatic draconic creatures were thought to be extinct after a few natural disasters changed the shores and bays where mantadrakes would make their homes. It is thought that the few surviving mantadrakes were displaced and have roamed the seas in search of new hunting and mating grounds. In the past few decades, more and more mantadrakes been spotted returning to the Shimmering Depths and along the shores of Aergys and Naz'thul.   Opportunistic Hunters. Mantadrakes often hunt fish, cephalapods and other aquatic creatures for food that are not larger than themselves. Because mantadrakes are solitary creatures, they always hunt their prey alone. They are quick swimmers but will first attempt to stun their targets and follow up with their paralyzing poison, after which they feed on the prey. Individuals exploring the seas and oceans of the world should always be on the lookout for dangerous creatures emerging from the blue, and mantadrakes are no exception as they are known to drag shipwrecked sailors, divers or swimmers into the depths and tear them to (bitesize) pieces. The mantadrake continues to grow as it ages, decreasing their list of natural enemies over time as they become larger and larger. 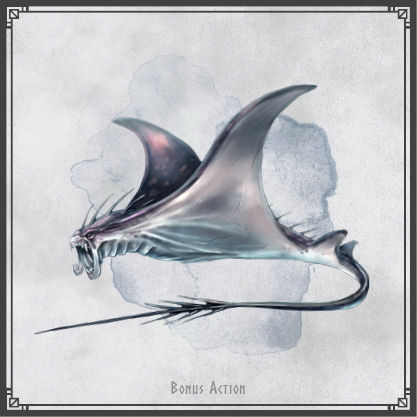 Leaping Threats. These drakes are surprisingly nimble and quick within the water but are also able to 'fly' short distances by forcefully leaping out of the water and flapping their fins. Even though they usually do not attack ships or boats unless provoked, there are documented instances of a mantadrake leaping out of the water, flying over the deck, gripping a person with their strong jaws and dragging them under the waves.
Show statblock
COMING SOON
Creatures