Shore cats are small amphibious creatures that could be described as half cat, half shark. They have razor sharp teeth and are quick as a whip. Although some view them as excellent pets, a wild shore cat should always be approached with caution.
Shore Dweller. Much like a regular cat compared to a lion, shore cats are a much smaller species than their sea cat cousins. Shore cats can be encountered in the wild but are predominantely a domesticated species. Merfolk as well as the people of Tiomera are known to raise and keep shore cats. Some keep them purely as a companion animal, while others keep them to hunt the pests around their home. Shore cats are an amphibious species and can breathe air as well as water. Typically, shore cats fare well in an environment where they can enjoy a spot on land or close to the surface where they can bask in the sunlight and close to a dynamic body of water where they can play and hunt. Because of this they are not only found in underwater communities of merfolk, but also in the wild on the shores of oceans, aboard seafaring vessels across the world and in the harbors and streets of seaside cities. 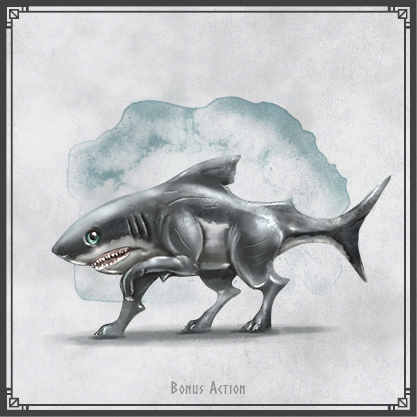 Fins, Teeth and Claws. There are a number of different breeds of shore cats that all have slightly different and distinctive features and behaviors. Difference in color of skin, fin shape and head shape have been bred into the species. However, almost all shore cats have very distinct pointy rows of teeth similar to sharks. They use these teeth to grab their prey, thrashing around in the water to tear it to shreds. A shore cat can shed up to five thousand of teeth in their lifetime. Shore cats make little use of their relatively small claws while hunting but they are predominantly used for climbing on land.
Show statblock

Saving throws Dexterity +5
Skills Acrobatics +5, Perception +3, Stealth +5
Senses Passive Perception 12
Challenge 1 (200 xp)
Amphibious. The Shore Cat can breathe air and water.
Pack Tactics. The Shore Cat has advantage on an attack roll against a creature if at least one of the Shore Cat’s allies is within 5ft. of the creature and the ally isn’t incapacitated.

Answering: "a species considered monstrous by some"
Visit Bonus Action's Competition Page Check all other answers to this prompt Competition Homepage

Oh my god, these are so adorable! What a great concept, and especially what great art. It's so shiny :o