Disciples of the Winged Shield

The Disciples of the Winged Shield are the religious group worshipping Thodir, the god of protection and justice. They task themselves with the protection of those that cannot fight for themselves. The order consists of followers, knights and servants. The knights are the martial protectors of people and justice, they are primarily Paladins and Clerics. The servants are those who aid the cause of the Disciples outside of the battlefield. These people include guards, priests, lawyers and scribes as well as doctors and armor smiths.

To become a Knight of the Winged Shield, a person has to complete extensive training in a temple or monastary of Thodir. The most famous of these stands in Wadfeld, where according to legend, Thodir was born and where he passed away and was buried. The training includes extensive teachings on the divine, ethics, war, battle tactics and the healing arts. It takes several years to complete the teachings and training, after which the person is sworn into the temple during which aspiring Paladins takes their oaths. They then take on a personal quest as a test of aptitude. These quests often have the apprentice knight travel the world to seek out injustice, protect the innocent in places where hostilities are taking place, or retrieve an artifact or scripture pertaining to Thodir. When the person completes this quest they return to their temple to be knighted, after which they are considered a Knight of the Winged Shield

Justice. Be truthful and fair in everything you do. Pass judgement with wisdom. Protection. Protect those who can not protect themselves. Shield others from harm. Persistence. Always strive to do better. Remain vigilant for corruption 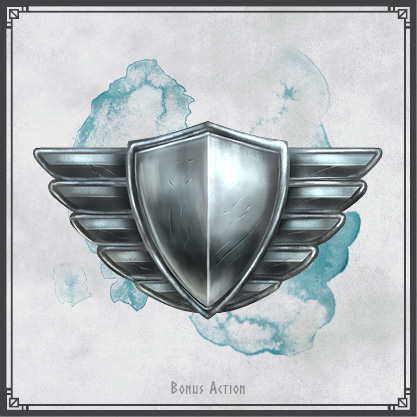 Alternative Names
Templars of the Shield
The Divine Protectorate

Answering: "a religious order founded or based in your world's history"
Visit Bonus Action's Competition Page Check all other answers to this prompt Competition Homepage