Gauntlets of the Ascended Protector

Artifact, Wondrous Item
Requires attunement by a Cleric or Paladin

These gauntlets were supposedly worn by the god Thodir himself. Because of this they are often referred to as: 'The Gauntlets of Thodir'. Legend tells of a dwarven smith who crafted them with the aid and divine inspiration of the smith deity Desgror. She offered them as a gift to Thodir after he had slayed a dragon that invaded her homelands. The gauntlets have been lost and found several times throughout the ages. Sometimes being split up from one another but always ending up on the hands of a heroic figure who wished to protect those that could not fend for themselves. The last person to wield both these gauntlets was Casator Naldorec during the final fight with the Red Queen   Two of a Kind. When you attune to The Gauntlet of Justice and The Gauntlet of Protection they turn into the Gauntlets of the Ascended Protector, these gauntlets only require one attunement slot. While attuned to this artifact you gain the following abilities.   Keeper of Justice. You have advantage on all Insight checks and disadvantage on all Deception checks.   Divine Knight. You can use a bonus action to make a spectral shield and/or a spectral melee weapon of any kind appear in your hands. Attacks you make with this weapon gain a +2 bonus to attack rolls and damage rolls. While wielding the shield you gain a +2 bonus to your AC and have resistance against non-magical Bludgeoning, Piercing and Slashing damage. When you drop one of the items, it fades from existence until you summon it again. If the weapon has the Thrown property it disappears directly after you have hit or missed your target.   Savior's Blessing. You can use an action to restore an amount of hit points to a creature within 10ft. of you equal to three times your level. You can use this feature twice times per long rest.   Savior's Curse. When an allied creature within 10ft. of you takes damage from any source, the amount is reduced by 3d4. You take an amount of damage equal to that number and your maximum hit points are reduced 3. Any reduction to your maximum hit points through this effect can be cured by Greater Restoration, or by finishing a long rest. 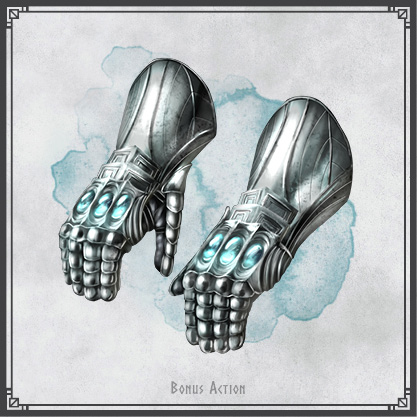 Answering: "an ancient and/or powerful artifact"
Visit Bonus Action's Competition Page Check all other answers to this prompt Competition Homepage