Sea giants make their home far beneath the waves, between the coral and seaweed is where they feel most comfortable. Some even inhabit the places where the sunlight does not reach. According to legend, these giants have left the surface world eons ago to be able to lead a more peaceful life in the briny depths.   Deep Thinkers. In contrast to some of their other giant brethren, sea giants are on average pretty intelligent and really enjoy the process of problem solving and thinking of solutions. When confronted with complex problems, sea giants tend to find a place of solitude away from others that might distract them. It is not uncommon for a sea giant with a particularly head splitting problem to spend weeks or even months in solitude in a hidden cove or seaweed forest     Family Friendly. Sea giants do not live in large communities, they usually stick together in small families of a maximum of two generations and up to ten individuals. Sea giant families are very close, so creatures that are able to befriend a single sea giant, usually befriend their entire family as well. Conversely, harming 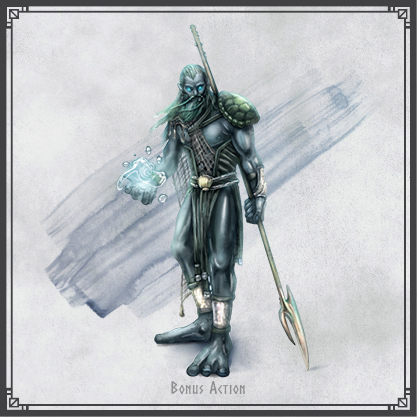 or mistreating a single giant will probably antagonize their kin as well. Sea giant children are taught almost everything by their own parents from language, to survival skills but also family secrets and stories. When they come of age, they will leave the family to find a partner and start their own family to pass on their knowledge to the next generation.     Move with the Currents. The depths are always in motion and goes through many changes through the effects of strong sea currents and the shifting of tectonic plates. Creatures migrate through the seasons and storms above the waves may cause material from the surface world to sink to the bottom of the ocean. Seat giants are acclimated to this shifting landscape and do not call a single place their home. Instead they tend to live in several places choosing their home for that time depending on which is most comfortable and quiet for that moment. Unknowing explorers of the deep might think they are in an empty cove and be caught off-guard by a family of sea giants that have just come back to their home.   Adapted. Life underwater has turned sea giants into strong swimmers. They usually have muscled arms and chests and their webbed hands and feet allow for a lot of water displacement when swimming. Sea giants have evolved and developed not only the ability to breathe underwater but have also gained innate magical abilities to shape and animate the water itself, which allows them to propel themselves even faster through the water. Sea giants are able to use these abilities offensively by projecting the water forcefully at their targets. Some stories from sailors event tell of sea giants that caused giant maelstroms with these powers.
Show statblock

Multiattack. The Sea Giant makes two Spear attacks, or one attack with their Spear, and one with their Net.
Spear. Melee Weapon Attack: +9 to hit, reach 10ft., 60/180ft., one target. Hit: 17 (2d10+6) Piercing damage.
Net. Ranged Weapon Attack: +4 to hit, range 10/30ft., A Huge or smaller creature hit by the net is Restrained until it is freed. A net has no effect on creatures that are formless. A creature can use its action to make a Strength check (DC 12), freeing itself or another creature within its reach on a success. Dealing 10 Slashing damage to the net (AC 12) also frees the creature without harming it, ending the effect and destroying the net.
Pressure Bubble (Underwater only). Ranged Spell Attack: +6 to hit, range 180ft., one target. Hit: 36 (8d8) Force damage.
Ebb and Flow (Recharge 5-6). The Sea Giant manipulates the water in a 60ft. cone outward from them. They can choose to pull or push the water. All creatures who are submerged in this body of water have to make a Strength saving throw (DC 14). On a failed save they are moved 20ft. towards or away from the Sea Giant. On a successful save they are only pulled or pushed 10ft.

Answering: "Α species that survives in an unlikely place"
Visit Bonus Action's Competition Page Check all other answers to this prompt Competition Homepage