Wielding a Silver Snow Glaive, these stalwart defenders stand guard within the city of Entari, the wardens of the glittering Pearl Guard hold a close eye on their kin in the north of Wolfsbrunn.   Protectors. Wardens are the guardians of the usual peaceful city of Entari. They can be found standing guard at the Court of the Triglomerate, Sanctum of the Moon Mother and before its demise at the The Palace on the Lake. During times of war, the wardens may trade their Silver Snow Glaive for a Greatsword to serve as a Knight.
Show statblock

Multiattack. The Pearl Guard Ranger makes two Glaive attacks.   Glaive. Melee Weapon Attack: +5 to hit, reach 10ft., one target. Hit: 8 (1d10+3) Piercing damage. If the Pearl Guard Warden scores a critical hit with this attack, the target has to make a Constitution saving throw (DC 13). On a failed save their movement speed is reduced by 20ft. until the end of their next turn. 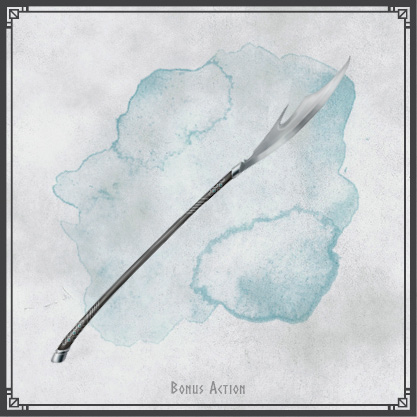