The griffon riders of the Pearl Guard are commonly known as the Winged Legion. High in the sky, atop their Arctic Griffons, they protect the city of Entari from airborne threats and patrol the borders of the region.   Winged Protectors. Becoming a griffon rider is one of the highest honors for a member of the Pearl Guard. They are the most capable and well trained warriors of the guard and are perceived by the general population as a shining example of mastery in the arts of war. The Winged Legion plays a huge part in warfare for the Pearl Guard, as they are able to oversee the battle as well as strike the enemy from above with their Silver Snow Bows. Riders also sweep down from above and strike their foes with their Silver Snow Blade, flying out of reach before any oppossing forces can counter their attack. During times of peace, the riders fly out from the Twin Forts and patrol the borders of Entari. Together with the scouts of the Pearl Guard they are responsible of detecting all visitors entering the lands.   Tumblers Griffon riders are attached to their mount with an invention made by the Silver Hand. It consists of a 10ft. long braided metal thread which can be attached to the belt of the uniform. The other end features a large metal ring with a quickrelease. The ring itself can be attached to the underside of a Griffon Saddle and makes sure the rider does not fall to their death if they are knocked out of the saddle. Through the years riders have learned how to perform acrobatic leaps by jumping off their mount and swinging back up on the other side, hence it's namesake: the Tumbling Ring. Some have even perfected the art of attacking their targets while swinging from a flying griffon.
Show statblock 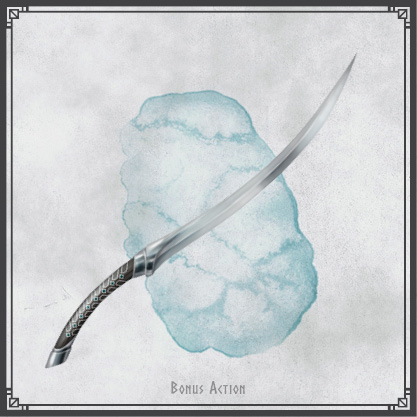